AN INSPIRATIONAL STORY OF AIMING HIGH 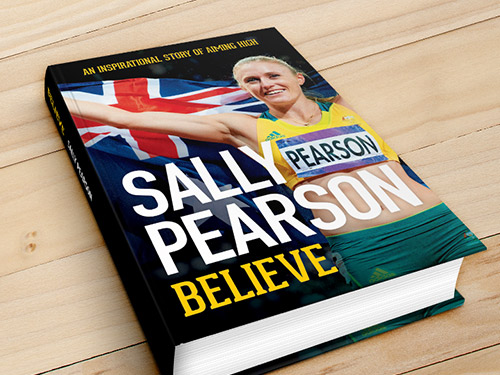 ‘We’re a sporting nation; we can’t help ourselves, we love winners. Believe is a story about winning by never giving in, about a ceaseless quest by one of our champions, about our Sally. It’s a great and ongoing story’
– General Peter Cosgrove

Olympic champion Sally Pearson is one of Australia’s most treasured athletes. The first Australian to win a gold medal on the Olympic athletics track since Cathy Freeman in 2000, Pearson’s honest pursuit of excellence and her refusal to allow any obstacle to stand in her way have lead her to be one of the greatest and most loved athletes in the country.

Sally Pearson has shown throughout her remarkable career that competitiveness and passion are hardwired into her very being. Not since Cathy Freeman in the Sydney Olympics have Australians been so excited by the international success of a sportswoman. Sally’s triumphs on the athletics field — a gruelling test of concentration, technique, speed and endurance — are a tribute to her indomitable will. Believe is the inspiring story of her journey to the top of her field, and her path to recognition by her peers as the best in the world.

Still in primary school when she was first noticed for her athletic ability, Sally was only 14 she won the Australian under-20 100m title. From there she moved from strength to strength, winning gold in the World Youth Championships, gold at the Commonwealth Games and gold at the World Championships, breaking a swag of records. In 2011, along with Usain Bolt, she was awarded Athlete of the Year by the International Association of Athletics Federations. She is the first Australian to receive the award. Leading up to the London Olympics Sally won 32 of her 34 races. In the Olympic race Sally clocked 12.35 seconds to break the Olympic record and win gold, beating the best in the world.

Believe illustrates that anything is achievable with hard work, determination and perseverance.

‘It is absorbing to read an account at the end of an elite athlete’s career, but so much more gripping to read about them when the competitive fire burns brighter than ever and they are at the pinnacle of their event. How did they get there and how do they keep on doing it?’
– General Peter Cosgrove

Get your copy of Sally’s Book here